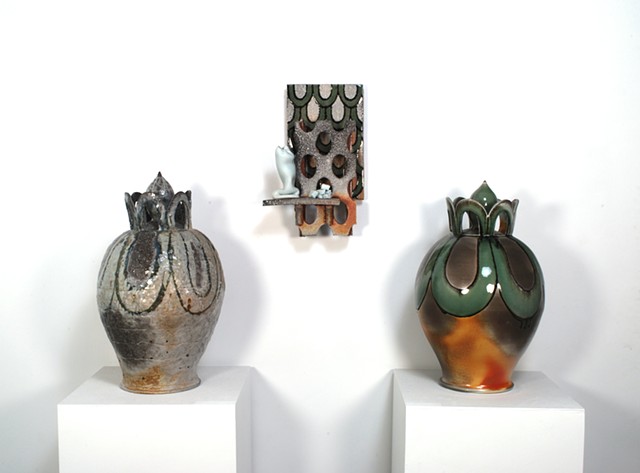 My work has transitioned over the years, moving from my functional roots to sculptural, figurative, and mixed media, and then finally back to its functional origins. While exploring figurative work, I focused on anonymous, faceless (sometimes upper-body-less) characters, whose only clues to their meaning are their posture and stance and how they are interacting with the environment. My sculptural forms have given way to a more microcosmic expression of functionality.

Utah is home to me; it is the place I have spent the majority of my life, although the last two years have been spent moving around the country. This has given me a new perspective on the openness and vastness of Utah’s landscape and how radically it contrasts from the environments in which I have recently lived. The field of vision is infinite; the landscape is dramatic in color and form—from the red and grey rocks, to the forests in the mountains, to the ubiquitous blue sky. Chicago has a beauty in and of itself. Lacking a sense of limitlessness and natural visual drama, it is vertical, dense, and geometric with its steel and concrete structures and urban landscape. My quasi-architectural forms are a reaction to this new environment. They are assembled in a manner that references different basic building styles and construction methods, but remember the colors of my past life.

I focus on making work that is comfortable and familiar. I want my forms and motifs to vaguely reference some sort of thing you’ve seen before, but you’re not quite sure where. The surface is defined with arches, ellipses, and other patterns that I render in slips and glaze. The patterns are mapped out based on the golden ratio, and, by repeating and flipping simple mathematical graphs, my motifs emerge. After the precise formation and decoration, the elements and atmosphere of the soda kiln complete the work. Ultimately, the interaction of the glazes, slips, and fire obscure, yet enhance, the preconceived cogency of the patterns.